Time to Stop the Oppression Against the Hmong

Highlight on Life Clips, AI, and Speech Based Technology in Psychedelic Science

A Global Gathering for India

Vampires – immortal, seductive, pale, garlic hating blood suckers who transform into bats… night stalking monsters that prey on our deepest fears, dwelling in the margin between life and death.

Fiction and fantasy have shaped our perceptions, but what is the truth behind the myth?

The first familiar representation of the vampire appeared in 1819 with the publication of “The Vampyre” by English writer John Polidori. However, it wasn’t until 1897 with Bram Stoker’s classic “Dracula”, that these supernatural beings were cemented into the modern psyche.

His character was in part inspired by Vlad the Impaler (aka Vlad Dracula), a Romanian prince from the 15th century. However, even though Vlad was about as evil as you can get and lived in a spooky castle, he was never considered to actually be some kind of supernatural being.

To have a better picture of what inspired the vampire, one has to go far back in time.

Bloodsuckers Around the World 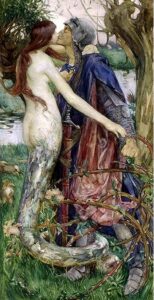 A wide range of ancient myths exist of supernatural creatures which consume the flesh and blood of human beings.

In Greco-Roman mythology exists the Lamia, a child eating monster with the breasts and head of a woman but the body of a snake. It later became synonymous with the empusai, night prowling demons believed to seduce and feed on young men. 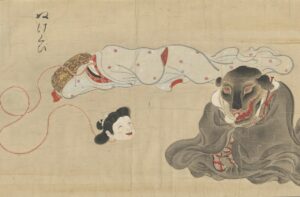 Japanese folklore tells of Nukekubi, a being with a detachable head who flies at night hunting human prey.

In Africa, the Betsileo people in Madagascar fear the ramanga, a blood drinking outlaw who also eats the nail clippings of nobles. Out of India are the pishachas, flesh and

blood hungry demons from Hindu theology – who are believed to be particularly fond of pregnant women. 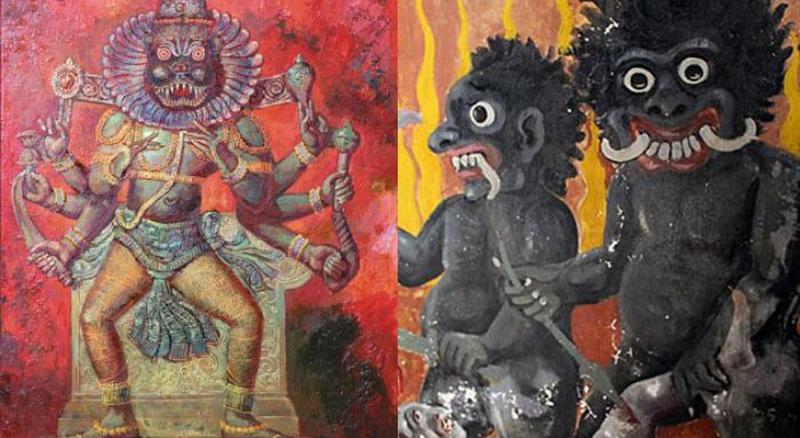 From pre-Islamic Arabia come the ghuls. Desert dwelling monsters from the demon class of djinn, they prowl graveyards and feast on humans – including children. 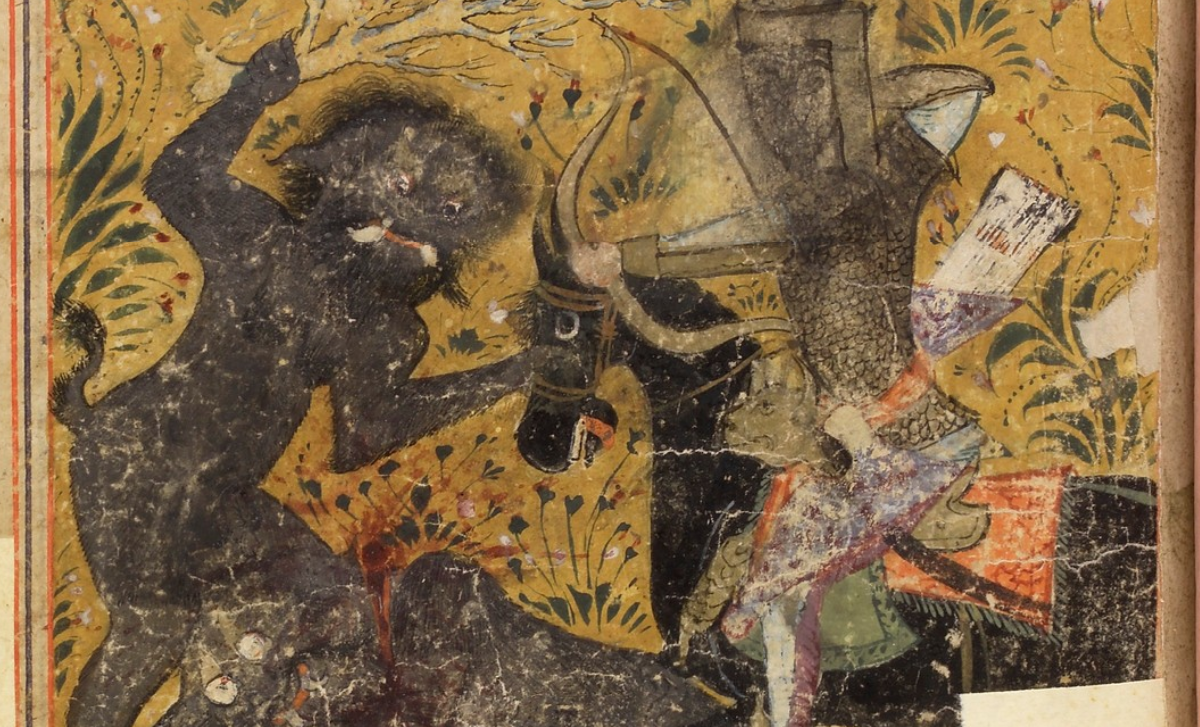 The western characterization of these creatures traces its origin to medieval Europe. But it wasn’t until a wave of mass hysteria in the 1800’s that the name vampire was popularized.

During this time, reports from the Balkans and Eastern Europe detail accusations of ‘vampiric’ behavior, grave diggings, and the staking of corpses – an attempt to prevent their unholy resurrection.

However, archaeologists recently discovered a skeleton in Bulgaria from the 13th century with a stake through its heart, hinting at a much longer history of vampiric accusations. 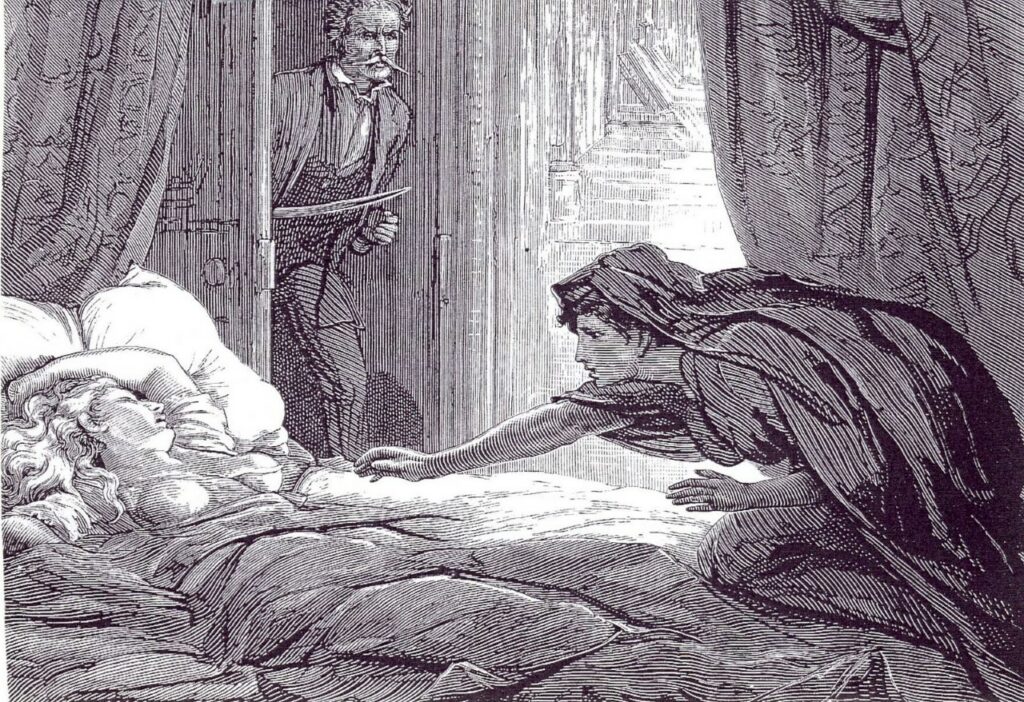 The first well documented account of a real person deemed a vampire was Jure Grando Alilović.

A villager from the region of Istria (modern day Croatia), Alilović died from illness in 1656. Accounts claim that for 16 years after death he would rise from his grave and terrorize the nearby village.

Recorded by local priest Father Giorgio, the first sign of trouble was mysterious nighttime knocking heard on some of the villager’s doors. Within days, all those who had been ‘visited’ allegedly dropped dead.

As panic spread, the most courageous in town decided to hunt down Alilović. On the night they finally caught up to the undead menace, the villagers attempted to kill him by thrusting a hawthorn stick into his heart – only to have it bounce off his chest.

Undeterred, Father Giorgio led nine villagers to the graveyard the following night to finish the job.

Horrified, they once again attempted to plunge a stake into his heart, failing to pierce his cursed flesh.

Thinking all was lost, many began to pray… but one of the villagers finally had enough.

Swinging his axe, he aimed at the corpse’s neck. As the blade made contact, the undead Alilović sprung to life – screaming until he was ultimately beheaded.

After that gruesome night, peace returned to the village.

Feasting on blood, nocturnal behavior, aversion to sunlight and garlic…could any of these symptoms be explained through scientific diagnosis? A couple candidates come to mind.

Rabies – a viral disease spread by mammals – attacks the brain and almost always results in death. One symptom includes hypersensitivity, which would explain a person’s strong reaction to garlic and light. Rabies can also affect parts of the brain associated with sleeping patterns and hypersexuality – which could result in the vampiric behavior of nocturnal sexual predation.

A rare blood disorder known as porphyria is another interesting explanation. Some versions of this affliction cause extreme sensitivity to sunlight – to the point of burning and blistering the skin. The disease can also cause psychiatric symptoms such as insomnia, mania, confusion, delusions, hallucinations, and psychosis. One main treatment for porphyria is blood transfusions and in 1985, biochemist David Dolphin posited that a substantial oral ingestion of blood could cross the stomach barrier and alleviate symptoms.

However, this claim has been challenged by the scientific community.

The Psychology of the Nightmare 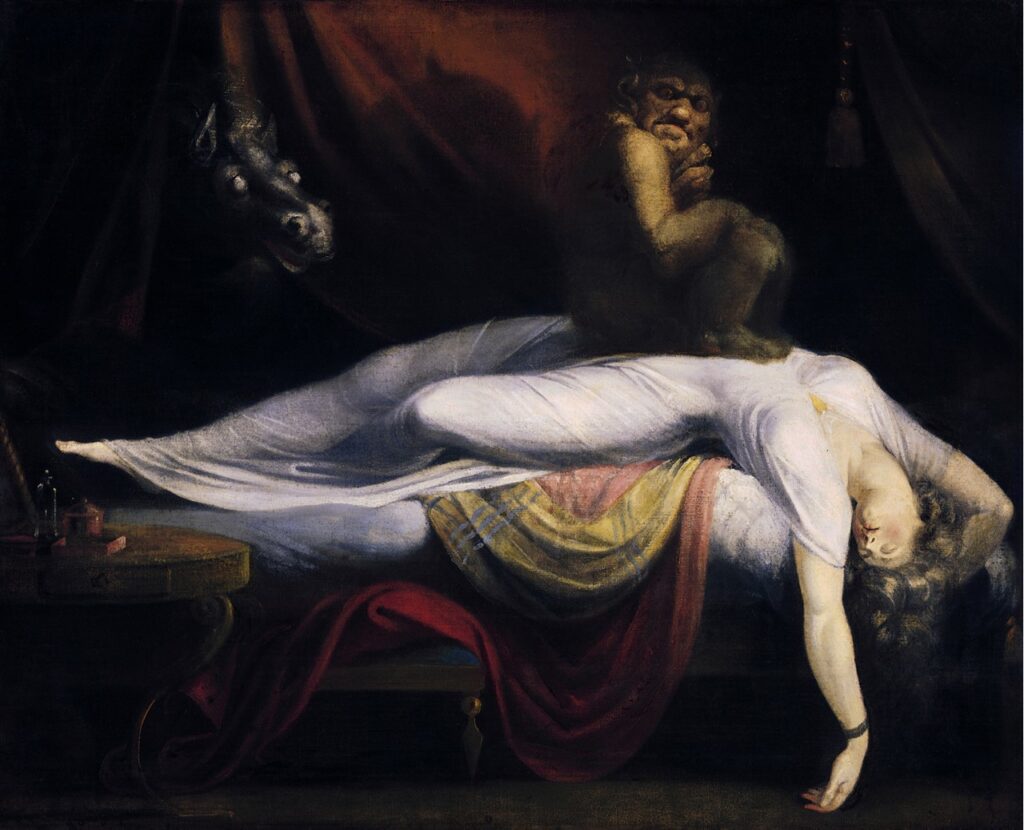 If what lurks in the shadows is nothing more than our own dark thoughts, what could explain the vampire as a psychological manifestation?

Ancient accounts of vampire-like beings include graphic descriptions of full-blown cannibalism and the predation of children.

In many archaic cultures, infanticide was common occurrence. It is possible that child eating creatures were a moral scapegoat for the heinous actions of these ancient peoples – functioning as a subconscious release valve for personal responsibility.

Concerning cannibalism, it was a well-known phenomenon in prehistoric times. From Eurasia to the Americas, evidence for the consumption of human flesh has been found – and not always due to starvation. It is conceivable that many tales of man-eating monsters are an echo of this psychological trauma, passed down as myths of a monstrous “Other”.

An interesting modern analysis is found in Ernest Jones’ 1931 treatise On the Nightmare. A Welsh psychoanalyst, he was the first English-speaking psychoanalyst and a lifelong friend of Sigmund Freud.

Jones describes a ‘true’ vampire as having “two essential characteristics […] his origin in a dead person and his habit of sucking blood from a living one, usually with fatal effect.” Fear of the dead is a self-evident reason for why man may be haunted by such encounters, but Jones argues there is also a positive cause.

In Western accounts of vampires, it is common occurrence for the being to visit relatives and spouses.

Jones argues that “the belief that the dead can visit their loves ones, especially by night, is met with over the whole world” due to the “wish for re-union based on love”. He claims that “the deepest source of this projection is doubtless to be found in the wish that those who have departed should not forget us, a wish that ultimately springs from childhood memories of being left alone by the loved parent.”

He continues, stating that the idea of the living joining the lost one in death is “definitely pathological”, and that evidence for “this motif of the living being drawn by his love into death, where the two parted ones are for ever [sic] united, occurs in a great number of narratives, dramas and poems as well as in actual beliefs.”

Seeking reunion with loved ones who have passed is an attempt to have eternal love. It also functions as a morbid state of ‘immortality’ – another trait of the vampire.

In the words of Jones: “A dead person who loves will love for ever and will never be weary of giving and receiving caresses.”

Along with the succubus and incubus, modern vampires are imbued with sexuality. Jones considers the behavior of blood sucking itself to be clearly sensual.

According to Jones, these experiences are a way people explore repressed sexual desires – as this eroticism tilts towards perversion for “the dead being allows everything,

can offer no resistance, and the relationship has none of the inconvenient consequences that sexuality may bring in its train in life.”

Sex brings life and death takes it away. We wish to love and be loved forever, but even the truest of love is a mere fleeting moment when faced with the infinity of the afterlife. Perhaps these nightmares are an attempt to transcend these facts. 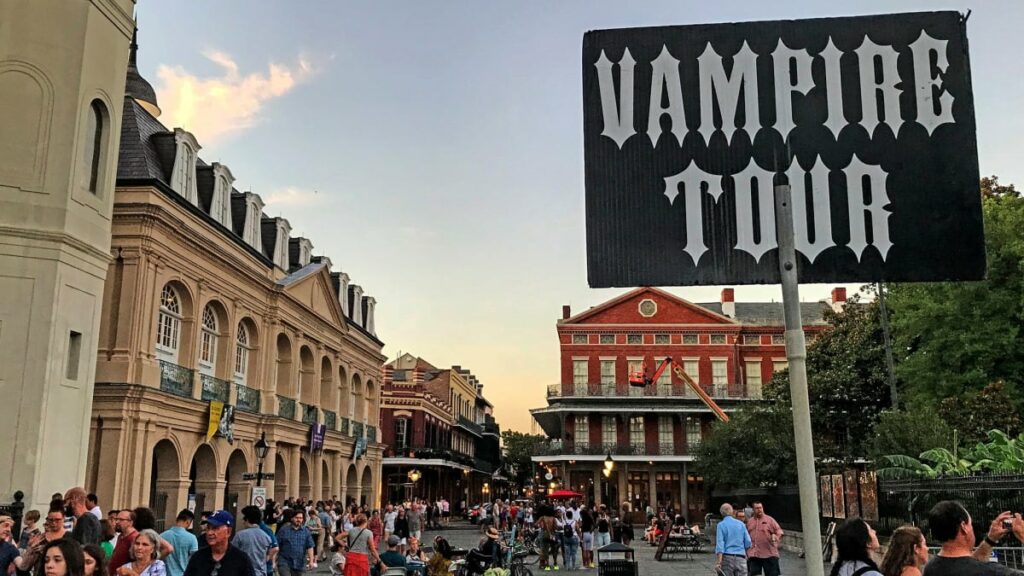 But it’s not all psychoanalytical gobbledygook!

From books to film, paintings and other art, vampires continue to thrive in pop culture as an iconic character. People find joy in emulating the vampire – whether it be through role-playing characters, kinky bedroom scenarios, or Halloween costumes.

Some take it to the next level, living a whole lifestyle around vampirism.

Thanks to the internet, those who wish to enter the vampire lifestyle can easily connect with likeminded creatures of the night. Dozens of websites exist which discuss everything vampire – from politics to sex-life. There are guides on how to live one’s daily life as a vampire, covering topics such as: how to drink blood, types of vampire fangs, pubic hair fashions for vampires, and what to wear to kill someone. Hopefully that last one means a ‘killer’ fashion statement…

In New Orleans, there’s an entire neighborhood of vampire enthusiasts. Wearing gothic clothes and sporting sharpened teeth, they live and breathe the vampire 24/7. Some hardcore members drink blood (hopefully humanely sourced!), believe they channel psychic powers, and a few even claim to sleep in coffins every night. As they say, live and let live.

Regardless if they’re real supernatural beings, humans with undiagnosed afflictions, or psychological archetypes, vampires seduce the imagination into questioning what is possible. Frankly, their Faustian bargain for eternal life seems like a damn good deal…

California Climbs Aboard the Psychedelic Spaceship

0
darkmattersadmin February 24, 2021
No Comments Yet