Although museum collections point to the contrary, fossils are not a common phenomenon – requiring specific conditions to form.

The fossils we are fortunate enough to find only represent a miniscule fraction of the grand history of life on Earth – as the vast majority of organisms are simply lost to time.

More often than not, scientists unearth a mysterious, fragmented bone or two. Even before they attempt to identify a puzzling find, simply extracting the fossil from the earth can be a painstakingly meticulous process.

But once in a while, scientists hit the jackpot.

News of dinosaurs usually occurs when a report that a complete skeleton or new species has been discovered.

But in a near miracle find, paleontologists unearthed a fossilized dinosaur which gives insight into the behavior of these animals.

Sitting on top of a clutch of eggs at their time of death, the ancient animal was uncovered in Ganzhou City, located in southern China’s Jiangxi Province and is considered a once-in-a-lifetime discovery. 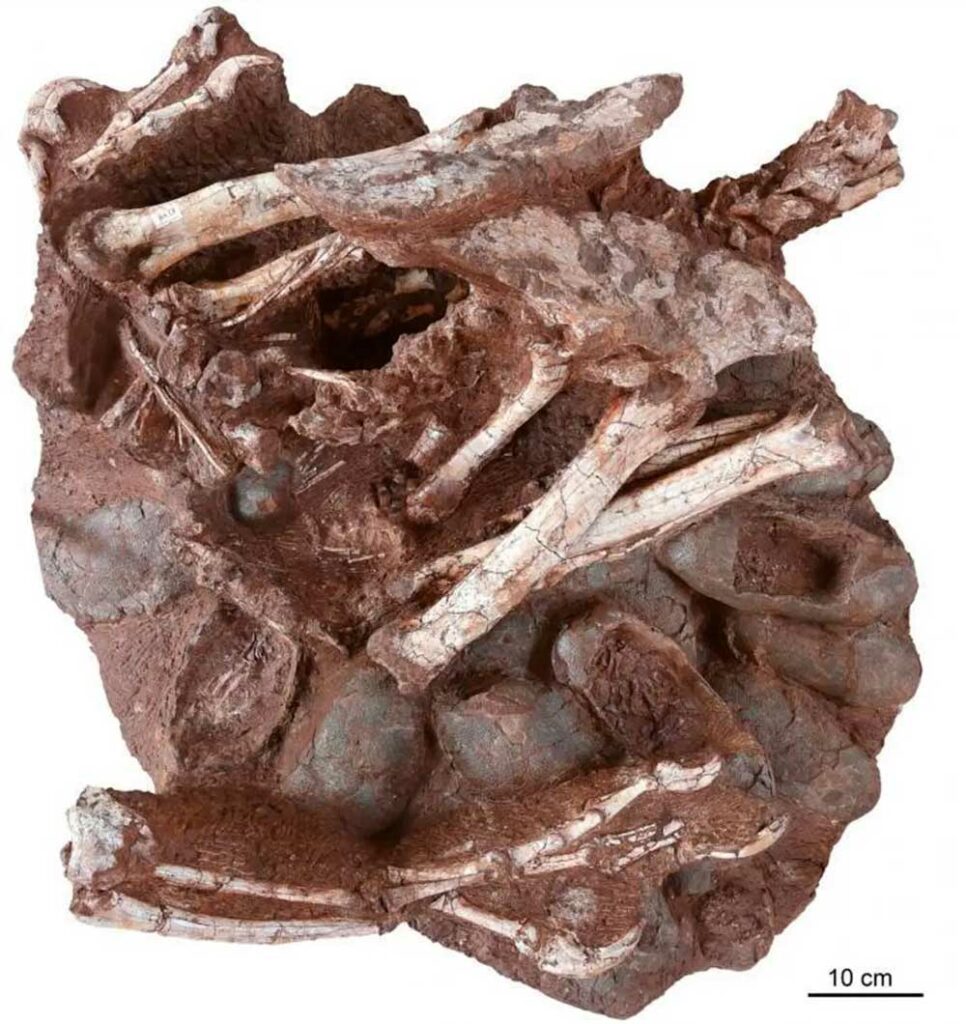 The news was published in the journal Science Bulletin by Dr. Shundong Bi, professor at Indiana University of Pennsylvania and research associate at Carnegie Museum of Natural History and Xing Xu, paleontologist at the Institute of Vertebrate Paleontology and Paleoanthropology in Beijing.

Interviewed by the Carnegie Museum of Natural History, Dr. Bi explains the significance of the find:

“Dinosaurs preserved on their nests are rare, and so are fossil embryos. This is the first time a non-avian dinosaur has been found, sitting on a nest of eggs that preserve embryos, in a single spectacular specimen.”

According to the researchers, “The apparently late level of development of these eggs combined with the lack of sediment between the bones and the eggs suggests that the oviraptor may have been incubating its nest when it died.”

Thought to be around 70 million years old, the fossil has been identified as an oviraptor, a class of smaller, feathered, omnivores (sometimes herbivores) which are characterized by their toothless parrot-like beaks. Although bird-like, these animals are classified as non-avian dinosaurs.

Being an oviraptorosaur, the animal belongs to the same clade as the famous “Chicken from Hell”, a group of theropod dinosaurs that lived during the Cretaceous Period – the final chapter of the Mesozoic Era 145-66 million years ago. 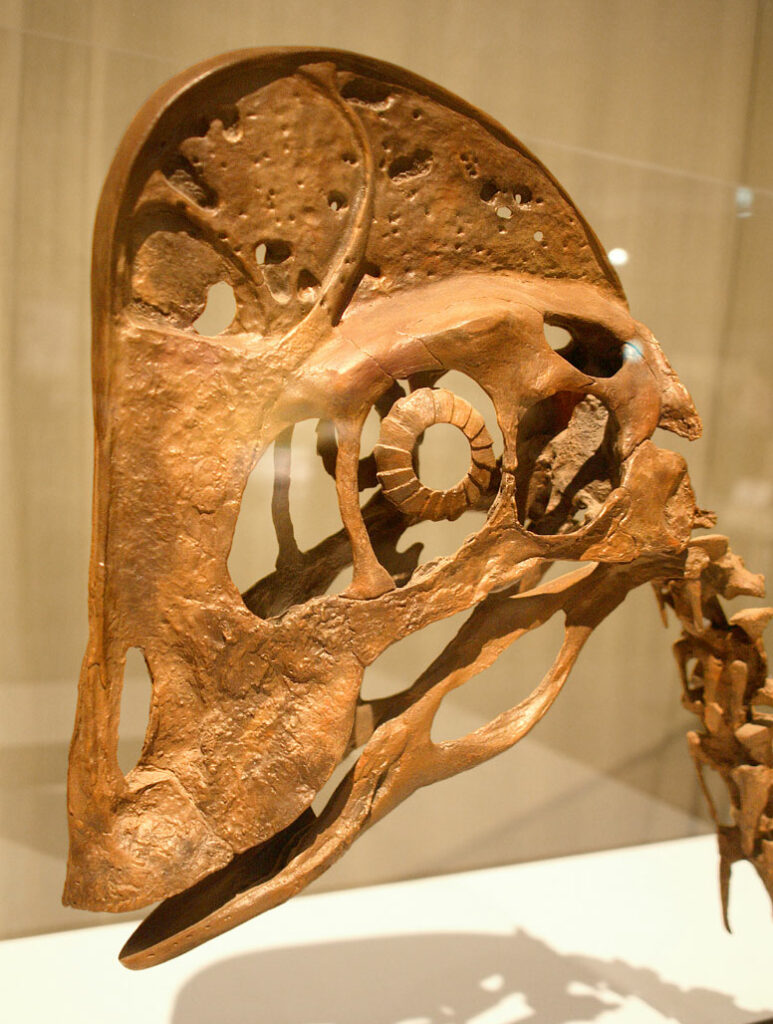 The new find shows this species of dinosaur “in a bird-like brooding posture” on top of a clutch of at least two dozen eggs – which amazingly still hint at their illustrious blue color.

Even though paleontologists were unable to determine the sex of the animal, many other interesting insights have come to light.

“This kind of discovery—in essence, fossilized behavior—is the rarest of the rare in dinosaurs. […] Though a few adult oviraptorids have been found on nests of their eggs before, no embryos have ever been found inside those eggs. In the new specimen, the babies were almost ready to hatch, which tells us beyond a doubt that this oviraptorid had tended its nest for quite a long time. This dinosaur was a caring parent that ultimately gave its life while nurturing its young.”

Through their analysis of the skeleton, scientists also discovered gastroliths within the animal’s stomach, – also referred to as “stomach stones” – hinting that this species was unable to entirely process foods through grinding their teeth.

Apparently dying in the midst of incubation, the animal’s close proximity to their brood of eggs in such a late development has caused scientists to conclude that this dinosaur’s behavior more resembled its modern bird cousins.

By analyzing oxygen isotopes within the eggs, the researchers determined that they required a higher temperature throughout their care, a trait shared amongst birds rather than reptiles such as crocodiles – who do not need to concern themselves with regulating the heat of their unborn, instead simply needing to protect their eggs from predators.

Remarkably, scientists were able to analyze the eggs with embryos to the point of being able to conclude that they displayed different stages of fertilization – a trait known in birds but thought to have been a way later evolutionary development.

This trait is referred to as asynchronous hatching – where an animal’s eggs hatch at different times.

A representative from Carnegie Museum of Natural History has even claimed that scientists were able to distinguish “forearms, pelvis, hind limbs, and partial tail of the adult” within the fossilized embryos.

From Terrible Lizards to Nurturing Birds 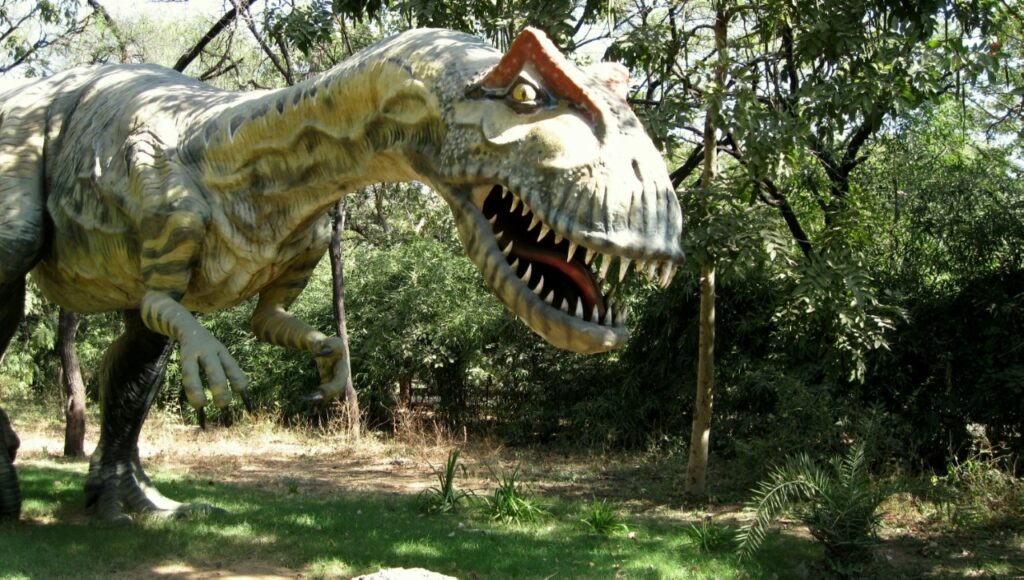 In 1815, a man named William Buckland discovered the mysterious remains of what he described as “some sort of extinct, carnivorous lizard” in the countryside of England. Naming the creature “Megalosaurus”, it became the first dinosaur fossil to eventually be correctly identified.

Although he was the first person to name a species of dinosaur, Buckland didn’t fully understand what he had found – as the classification of “dinosaur” hadn’t even been invented yet.

It wasn’t until 1842 when Sir Richard Owen classified the fossil group as “Dinosauria”, Greek for “terrible lizard”, that science finally had a name for these animals.

As more of these fossils continued to be unearthed, their newfound name as dinosaurs came with a sort of baggage, creating a bias within paleontology.

As scientists attempted to guess the appearance of these ancient creatures, their label as “terrible lizards” lead to illustrations of them as giant, scaly reptiles.

However, as the scientific field progressed, paleontologists realized that birds are living dinosaurs, being the last evolutionary branch to survive up until now.

Paradoxically, even though all birds are dinosaurs, not all dinosaurs are birds. This is why scientists now distinguish dinosaur fossils as being either avian or non-avian.

Slowly, illustrations of these animals have been reimagined with bird-like traits such as feathers – even the mighty Tyrannosaurus-Rex is now thought to have sported a fluffy coat.

Given science’s further understanding that many classes of these animals were more bird-like than previously assumed, it is no surprise that this animal’s final act is reminiscent of the behavior of modern birds.

This unique example of fossilized behavior reveals a touching story of a caring parent, who ultimately sacrificed their life while protecting its unborn children.

The Art of Conscious Cannabis Cultivation